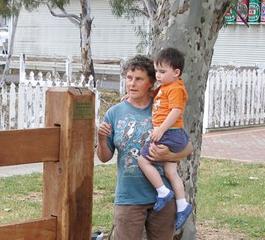 An earlier story reported renovation of the hitching rail in front of 'Winarlia' by the 'Bootstrap Brigade'. We are now delighted to announce that it has been named the 'Jan Spate HItching Rail' in recognition of Jan's extraordinary contribution to the Hall and district community.

A special thank you to Bob Richardson and Shaun O'Connor for manhandling the rail into place and to Brian Sainsbury from Dimensional Signs in Mitchell for the magnificent plaque.

Jan and Andy, other family members and friends, and those involved in this project held a small ceremonial unveiling on 19th November.