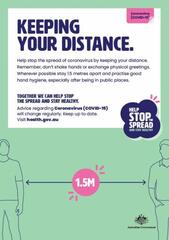 Were you in Batemans Bay last week? Did you visit the Soldiers' club?

Both ACT and NSW Health are directing patrons and staff who attended the Batemans Bay Soldiers Club on Monday 13 July, Wednesday 15 July, Thursday 16 July and Friday 17 July, to immediately be tested for COVID-19 and self-isolate for 14 days, regardless of symptoms.

Everyone must stay in isolation for a full 14 days even if their test is negative. Anyone who develops COVID-19 symptoms should also be retested, even if they have had a negative result previously.

Patrons and staff who attended the Soldiers Club on Tuesday 14 July are being advised to monitor for symptoms and seek testing if symptoms develop.

Four new cases of Covid-19 have been linked to the Batemans Bay Soldiers' club; one staff member, two cases who dined at the club and one case who is a close contact of the previously reported cases. Four cases who dined at the club had previously been reported, all members of the same family. One of the eight cases is a local resident of Batemans Bay.

Contact tracing for all those who attended the club during this period is underway by ACT and NSW Health.

Anyone feeling unwell – even with the mildest of symptoms such as a runny nose or scratchy throat – is urged to seek testing and self-isolate. Do not go to work or catch public transport until you are cleared of COVID-19.

Full information and the location of Covid-19 testing is available at www.covid19.act.gov.au/

« Daughters at Hall Featured in "Her Canberra" magazine