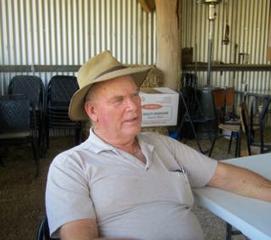 Community members who know John and Bev, and know something about the enduring commitment of the Starr family to taking care of and improving their land will have been delighted at the news that John has been named winner of the 2015 ACT Landcare Award for Innovation in Sustainable Farm Practices Award. Such an Award is not won overnight but reflects a long term commitment to leaving the land in better shape. It is a great pleasure to add our congratulations, and to spell out here why he is a winner.

John and his family have farmed Gold Creek Station/Kinlyside on the ACT's northern border, just outside Hall since 1970, first as managers for the Bruce family, and then as owners, running Hereford cattle and Merino sheep. The farm has gone from 2500 acres to around 1000 acres over the last 45 years, due to resumption of parts of the farm for suburban development. John has always managed his land to capability, to protect and enhance the property's native and introduced pastures and maintain groundcover.

Recognising early on the different land classes across the property from steeper country with shallow soils to fertile flats, he runs much less stock on the 'lighter country', and destocks these areas during drought or over winter when pasture feed is low. After drought he allows native grasses on these areas to fully recover before reintroducing stock. His approach to farming has seen a 201-hectare section of his property gazetted as Kinlyside Nature Reserve and biodiversity offset area (which he can still graze).

Surveys by ecologists and the Canberra Ornithologist Group have found that Kinleyside supports key habitat for threatened birds and a diversity of plant species that occur only in sites in good condition, which the ACT Conservation Council credits to John's conservation farm management practices. John and his family have also undertaken extensive planting of local native tree and understory species to protect groundcover and improve biodiversity areas on and adjacent to the fertile flats.  This has included fencing out and planting around a farm dam to create habitat; fencing out and planting trees in an eroded drainage line to stabilise the area; and participating in the 1999 Olympic Landcare initiative with three other landholders and the Hall community planting 6000 native trees on his property.

John's conservative management of his native pastures on the steep or less fertile areas of his property, has created very healthy and biodiverse areas of native grassland and woodland, as noted above. His management of the fertile flats has been focussed on maintaining a sustainable commercial operation.  During drought and over winter stock were hand fed on small improved pasture paddocks, close to haysheds, silos and bore water. The hay was grown on the property in good seasons and the grain grown or purchased opportunistically and stored. This has maintained stock in good condition during drought and winter feed gaps and maintained ground cover and reduced pressure on the fragile, steeper country. After drought feeding he sod-seeded fodder crops into the damaged pasture for regeneration and to provide feed into the future.

In addition John has participated in CSIRO Ginninderra Experiment Station trials of various Lucerne and fodder species and experimental sowing machines. He also applied early stock management innovation in 1971 (ahead of his time) by converting a set of Avery quarry scales to weigh cattle which enabled him to accurately identify the most productive cows leading to the most efficient use of pasture  Since the 1980s, the Starrs have run a very successful farm tourism business which has provided an alternative farm-based source of income as parts of the property have been resumed for urban development. By diversifying farm income, it means John has not had to put increasing pressure on the natural resource base of the farm, to produce more income from his stock as he lost land to urban development.

John is very active in the ACT community and has been involved and contributed to many organisations associated with Landcare including the Rural Landholders Association, Ginninderra Catchment Group (the peak body for northern ACT Landcare), the Bush on the Boundary reference group (which provides a forum for Landcare, farmers, land managers, government and community on management of the urban-nature reserve and urban-rural interfaces) and the ACT Regional Landcare Facilitator Steering Committee. He was one of the key drivers behind community Landcare activities including the Olympic tree planting which brought together landholders and the local community to plant over 10,000 trees along Hall's Creek.

John has been vigilant about weed control, in particular, control of serrated tussock which is widespread across parts Northern ACT. His son Craig is currently working with one of his neighbours in controlling serrated tussock infestations on the farm's western boundary. The neighbour had virtually lost the battle against this weed, but Craig, taking a Landcare-approach and working with Ginninderra Catchment Group has managed to bring him back on board and together they are cooperating to address weed infestations on the neighbours property, and control other weeds coming from the neighbouring areas, including the suburban areas onto the  property - drawing on advice from natural resource management expert Alison Elvin, from Natural Capital.
The farm tourism side of the operation hosts international groups from Inbound Tour Operators and Travel Wholesalers as well as visits from Embassies and Visiting Dignitary Programs also Educational Groups from Universities and Schools. The focus of the tours are Ecological and the Wool industry.

John has experienced many climatic challenges in his 45 years on Gold Creek Station and Kinleyside, including the devastating fires of 1979, which saw more than two thirds of the property burnt out, regular droughts (1982, early 1990s and Millennium drought stand out). Because of his approach to farming, based around managing land to capability, he has built a highly resilient farming system which has ensured the diverse pasture/grassland base of the property is protected and managed according to land class, season and climate, thus improving the property over the last 45 years. The biggest challenges he has had to contend with are security of tenure, and the loss of large sections of his property to urban development.

All ACT rural landholders are leaseholders and up until 1999, all rural leaseholders were on short term leases, ranging from a few months to a few years, to enable the ACT Government to resume this land for urban development. As has been noted by many people, this lack of tenure has many consequences for land management - landholders are reluctant to invest in landcare activities or innovative farm practices, if they have uncertain tenure. Despite insecurity of tenure, the Starrs have improved the natural resource base and sustainability of the property - by managing their land to capability and to season and climate.

They have also diversified their farm income, through the farm tourism business, as the ACT Government resumed some of their lease for urban development. By introducing an alternative stream of farm income, this has further protected the natural resources of the farm, as the Starr's have not tried to earn more income from less land. They still have short term leases on much of their property due to their proximity to North Canberra and the potential for future urban development - which continues to be a challenge.