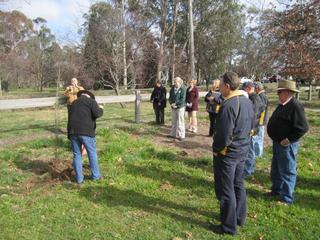 A small group gathered at the Hall Memorial Grove this morning to observe and take part in the re-planting of trees recently removed due to age and disease. The group included representatives of district families, members of the Rotary Club of Hall, and some local residents with at interest in this bit of our local history and heritage.

Five Memorial trees were replanted to replace those trees that honoured the following individuals from the surrounding area – J. Rolfe, K.A. Clark, A.V. Southwell, N.J. Southwell and E.G. Crace. Urban Treescapes, with the assistance of the ACT Heritage Unit and the Hall Progress Association, made an effort to contact descendants of of these families to notify them of the planting.

The trees planted today were Quercus robur 'Fastigiata' - or 'Upright English Oak', which are described as 'a tall upright columnar deciduous tree': 'oblong, wavy, dark green leaves cover erect branches forming a pyramidal shape as the tree matures'. This species was selected as they have a similar appearance to the original Populus alba (White Poplar) trees. White Poplar trees are no longer suitable to plant as they are listed as a pest plant under the Pest Plants and Animals Act 2005.

Our photo shows Rotary Club President Ralph Southwell under observation as he plants a tree.