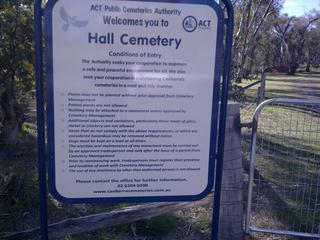 A new sign has appeared just outside the gate to the Hall Cemetery. Placed by the ACT Public Cemeteries Authority, it asks for public cooperation in maintaining a "safe and peaceful environment for all" and "maintaining Canberra's cemeteries in a neat and tidy manner".

This is followed by nine detailed rules. These include, for example:

Graham and Lyn Moss have raised several objections to this new sign, including that it was erected without any prior advice or consultation and apparently does not conform to heritage guidelines for such signage. They question the need for rules such as those above, and have asked the Progress Association to take the matter up. This is now being done.

Further information can be obtained from the Authority on 62040200.