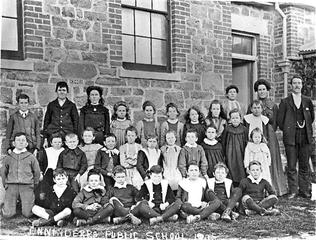 The ACT Surveyor-General has written to the Progress Association in relation to a proposed commemoration in Hall of Charles Thompson, the first and longest serving teacher at Hall School (1911-1933). The Association is requested to canvass the idea within the community that the 'Hall Reserve' over the road from the school, be re-named the 'Charles Thompson Reserve'.

The proposal arises from the Centenary project of the 'Friends of Hall School Museum', to mount an exhibition on the schools operating in Canberra in 1913, and the teachers who taught in them. It was decided early on in the project that it would be a fine mark of respect for the 'pioneer' teachers of the Territory if a number of them were nominated to the ACT Place Names Committee; Ellen Clark, Francis McGee and Charles Thompson were identified as nominees.

The Committee has accepted the three nominations, and is looking for appropriate locations to apply the names. In the case of Charles Thompson the 'Friends' group put forward the suggestion that the Hall Reserve might be renamed. The Place Names Committee now seeks indication that this proposal has community support.

While the recommendation for commemorating Charles derives from his impressive career as a teacher, he was also heavily involved in the community life of Hall and Ginninderra, as documented in the short biography below.

Feedback from the Hall and district community is sought by 13th September. At it's first committee meeting on 21 August, the Progress Association has put forward for consideration the alternative designation 'Charles Thompson-Hall Village Reserve'. You can also pass your views on to Heritage Officer, Phil Robson ().
[Our photo shows Charles and Matilda Thompson with a school group at Ginninderra, 1905]

A schoolteacher from 1886 to 1933, Charles Thompson taught in seven one-teacher bush schools during his 46-year teaching career. Five of these schools were located within the now ACT border; Gibraltar, Naas, Ginninderra, Gungahleen and Hall.

Charles was born in 1868 at Sutton Forrest NSW, the ninth child in a family of eleven. Charle's father came from Liverpool, England he was a labourer and had no known relatives; his mother, an Irish orphan from Tipperary. In 1871 the family moved to Towrang near Goulburn. Charles grew up and went to school in the district. His father was a fettler on the railway until he was killed in a train accident in 1888. Charles was a bright student and at the end of his normal schooling at 14 years became a 'Pupil Teacher' assisting the Master until 1885.

After the Public Instruction Act was passed in 1880, little schools began popping up along the eastern fringe of the mountain country, at Uriarra, Barnes Creek, Church Rock Valley, Gibraltar, Tharwa, Naas, Naas Upper, Bobeyan (or Tin Dish) and Shannon's Flat. Usually the parents had to build the first schoolhouse themselves, which was often just as simple as a slab room. If the school survived long enough, a more permanent structure was provided by the government.

In 1886 at age 18 Charles joined the NSW teaching service as a House-to-House teacher. Charles received his first teaching appointment as the inaugural 'House to House' teacher at the remote and difficult locations of Naas and Gibraltar. These were 16 miles apart, Charles taught alternately for one week at each .

Charles next two postings were to public schools in the Goulburn district; Claremont – 1888 to 1890 and Run of Waters or Yarra (between Goulburn and Canberra) – 1890 to 1895. In 1893 he married Matilda Jane Wetherspoon daughter of a prosperous farmer from the Crookwell region.

After his appointment there in 1895, Charles and Matilda took up residence at the Ginninderra Schoolhouse where they lived and raised their family for 38 years until 1933. Charles taught at both the Ginninderra and Gungahleen 'Half time'schools, Matilda, who took weekly classes in needlework and sewing assisted him. Charles on occasions also took adult classes in the evenings and helped members of the community with their business and private correspondence.

Charles became deeply involved in the wider Ginninderra district community. He was Secretary of the Ginninderra Farmer's Union for the eleven years of its existence, Secretary of the School of Arts, and involved in many more community activities. He was a poet, the author of many school magazine articles and a great contributor to the local press, mainly the Queanbeyan Age. Charles and Matilda had four children who were all taught by Charles at Ginninderra and or Hall.

In 1907 Ginninderra became a Public school with about 45 pupils and Charles as teacher. Gungahleen became a separate Provisional School with its own teacher. In 1910 the Ginninderra School closed and the new school at Hall opened with 29 pupils and Charles as teacher. Charles and Matilda continued to live in the Ginninderra schoolhouse. Charles continued his association with many community and sporting activities, including Secretary of the committee raising funds for the building St Francis Xavier Catholic Church in Hall.

On 12 March 1913 the Federal Government took responsibility for funding the Territory (FCT) services including education but it was still serviced by the NSW Government. Under this arrangement Charles Thompson became the first schoolteacher to be employed by the Federal Government.
Charles was a fair but strict disciplinarian, a naturalist, a scribe, and a great contributor to the community. He loved children and was born to be a teacher. Both he and Matilda were very popular within the Hall/Ginninderra community.

In 1933 Charles and Matilda retired to Manly, NSW, where they named their home 'Ginninderra'. Charles died on 10 December 1948 at age 80 after a short illness. Matilda and family received many letters of condolence when his past pupils and friends heard of his passing. There were obituaries in the Manly Daily, Canberra Times and the Queanbeyan Age relating to his esteem as a teacher, to his involvement in the Ginninderra district and with the Village of Hall. His life from 1868 until 1948 was in an interesting period and he made the most of it in passing his knowledge and wisdom on to others.
[Phil Robson, Honorary Curator Hall School Museum]