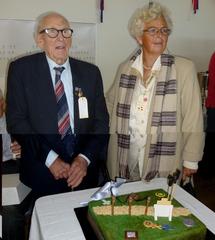 A large crowd gathered at the Pavilion at noon on Saturday 10th August 2013 to join Jim Rochford and Averil Muller in celebrating Jim's one hundredth birthday. Our photo shows Jim and Averil with the birthday cake.

Simon Southwell did a masterly job as MC, beginning with announcement of a long list of birthday messages. Wolfgang Wanjura read a poem he had written in honour of Jim and Len Coulton shared his memories of Jim from times gone by.

Amongst a number of special mementoes was a front page of 'The Land' celebrating one of it's oldest - and longest readers.
From various speakers we heard of Jim the farmer, the soldier, the garage owner, the church man, the community leader.

Marjorie Rule and a band of helpers produced a truly magnificent spread which was enjoyed by all, while many old friends were busy catching up those they had not seen for a while. The gathering included family members, friends from the St Francis Xavier congregation, Rotarians and Hall villagers. All have known Jim as an 'active citizen' - involved in a range of organisations and good causes - and always playing his part.

In a few well chosen words of reply, Jim gave recognition and thanks to all those who have stood beside him and offered help and support when it was needed.

After the speeches and the singing of 'Happy Birthday' (twice!) the crowd enjoyed a special audio-visual presentation on Jim's life and times which was expertly produced by Bill Pearson.

It cannot be forgotten of course that Jim shared his 100th birthday with Canberra, and was amongst those Canberrans
given special recognition in the Centenary celebrations.