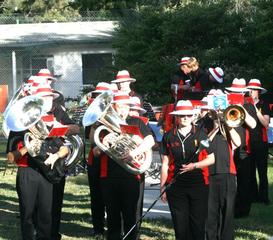 A large and enthusiastic gathering turned out on Sunday for 'Cat's Tales and so much more....' - the fifth annual Twilight Concert by the Hall Village Brass Band. The weather was superb and the mood was mellow. The gathering and the Band were welcomed by Progress Association President Gavin Mansfield.

The 'Victoria Street Brass' again opened proceedings, under the seasoned baton of Colin Fischer. After a short change-oveer interlude the Hall Village Brass Band impressed all by marching on before beginning their first bracket with the title number - 'Cat's Tales'. This was followed by a diverse program of jazz and popular standards.

The program included a number of items from vocal soloist, mezzo soprano Diana Tulip, which were very well received - 'Diamonds are a girl's best friend', 'Le Soir' (Gounod), and, aptly, 'Autumn leaves'. Musical Director of the Band Viv Martin, was polished and entertaining in his work, the program including the 'Saddleworth Festival Overture', 'Farondole' (Bizet), 'Sosban fach', and 'Gangman style' - made famous by PSY, a middle aged rocker from South Korea!

Barnett Lilley and Associates have continued their generous sponsorship of the event, which included supplying the prize (a fine mixed Tulloch dozen from the Hunter) and running the raffle. Stephen Barnett and Scott Lilley and their families were there to enjoy the show, along with a good number of their clients from all over Canberra.

As well as a fine afternoon's entertainment for a few hundred people, the event has raised almost $1,200 for the Hall School Museum and the Band as a result of the raffle and the bucket collection. This is an outstanding achievement, and a great tribute to the generosity of the audience. The Hall Preschool Parents Association also did good business from their refreshments trailer, raising more than $550.

« Saved from the chop?