Saved from the chop? 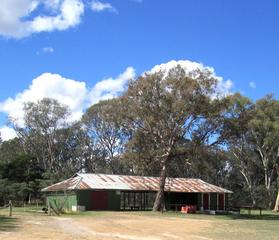 The Heritage Council has put a stop, temporarily at least, to plans to demolish the old stables building at the rear of the showground (pictured). The demolition plan came to light after a stack of temporary fencing appeared at the site - evidently intended to fence the building off.

The building, which is part of the legacy of the Canberra Show when it was conducted here in Hall, is listed in the Hall Village Heritage citation as one of the 'Places of specific value within the Hall village precinct'. As a result of a site visit on Monday 18th March The Development Application Taskforce of the Heritage Council is preparing advice for 'adaptive reuse of the building, rather than full demolition'.

We understand that the advice will also include a recommendation to engage an independent consultant to assess the existing building and propose different alternatives.

It is believed that the demolition plan is the result of an initiative by the Hall Pony Club, which uses the building, but finds it is no longer fit for their needs.