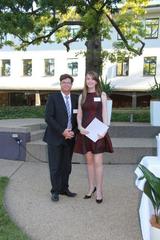 Many residents in the village will remember Julia Hayes from her time at Hall School and when working at the Hall Premier Store. Julia completed an Arts/Law degree at the ANU last year and recently received three prizes from the Law Faculty.

Congratulations to Julia who is now working in the Department of Immigration and Citizenship which is sure to present some new challenges!

Saved from the chop? »

« Party at the shops