Party at the shops 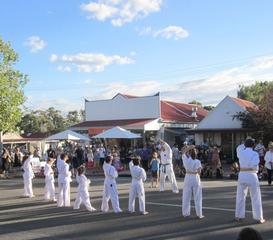 'Party at the Shops' was part of the Centenary celebrations, to mark and celebrate the role of local shops in the story of Canberra. Hall's shops have a very special place in that story of course, predating Canberra. Our General Store began life in 1889, and for much of the time since has also been home to the Hall Post Office. [More can be learned at the forthcoming exhibition, 'Hall 1913', in April].

In Victoria Street a range of local enterprises and community groups put their offerings on display. Amongst them Hall Attic staged a lucky dip, the Bushrangers Rugby Club had food and drinks, Peter and Anne O'Clery offered Homeleigh olive products, others offered local wines and artwork, and there were pizzas from Jacko's Pizza Truck.

Our own elder citizen and Canberra centenarian Jim Rochford made a ceremonious arrival by horse drawn carriage (with young Greg Rule as groom), and cut a beautifully decorated birthday cake - marking his, and Canberra's, 100th birthday (a little early in Jim's case!).

Our photo shows Sensei Sam (Steggall) - karate 'teacher' at the Hall Pavilion dojo for Okinawan Goju Ryu - demonstrating in the middle of the road.

Congratulations to Gavin and Trudy Mansfield, and all those who worked hard to make the Party at the Shops such an enjoyable and memorable evening. Some people are asking why we don't do this every year............?!