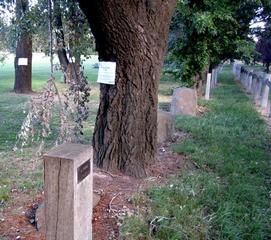 A sizeable group of community members assembled in the Cottage at the school yesterday evening to hear Mr Michael Brice, manager of the Urban Treescapes program in the Department of Territory and Municipal Services, give an explanation of recent events in relation to the planned removal of trees in Victoria Street.

The meeting, chaired by Progress Association Vice President Tony Morris, heard candid acknowledgement of a number of shortcomings in the consultation process for this project.

General advice about a tree pruning and removal program in the village was advised on the community notice-board at the shop last November. No more was heard until notices appeared on the twelve trees in question, on or just before February 13th. These notices invited public comment up to February 27th. However, on or around February 21st, the trees within the War Memorial Grove were axed and poisoned.

Mr Brice conceded that the notification in February of the impending work was inadequate, and that the poisoning of the trees, under the direction of his staff, and before the public comment period expired was 'unacceptable'.

He also reported on an exchange of letters with the Heritage Council, with the Council supporting the removal proposals but commenting in some detail on how it should be carried out. Mr Brice conceded that this correspondence could, and should have been made available to the community.

Most of those present seemed willing to accept the judgement of the tree experts, that the trees in question are in a more or less serious state of decline. It is the considered view of the experts that twelve trees from the 'avenue' which extends from Gladstone Street to the bridge over Halls Creek warrant removal, and that for logistical and economic reasons, this should be done in one operation.

It became evident in the discussion however that insufficient thought had been given to the impacts on the Memorial Grove and the families of those who are commemorated there. It was intended, for example, to plant one fewer tree than the number to be removed, and to use a different species, without any reference to affected families. These and other community concerns were acknowledged by Mr Brice, and there seems to be good prospects of genuine community engagement in future management of the project.

Mr Brice responded positively to requests that cut timber and mulch be made available to the community where feasible.

Party at the shops »