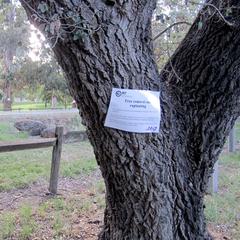 Notice has been served on twelve large trees lining either side of Victoria Street that there time is up. The ACT Government proposes to remove five of the eucalyptus trees on the left as you enter the village, and seven of the trees from the War Memorial Grove which runs along the edge of the showground.

A notice attached to each tree states that their condition requires that they be removed, and that this work has been scheduled. Each tree removed is to be replaced. Public comment is invited for two weeks from the time the notices were fixed to trees, which means up to 27th February. The number given is 13 22 81 - 'Canberra Connect'.

One possibility suggested by concerned community members is that the removals - if they prove to be essential - be staged, so that there is not a gaping hole in this important avenue that marks the entrance to Hall.