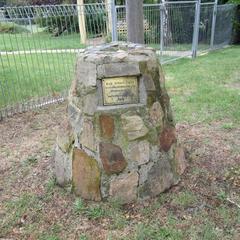 Your ideas are invited about what might be added to the Hall School Time Capsule, during the Centenary celebration on April 16th.

Some community members have expressed surprised that the Capsule is to be opened, given that it was only sealed on 6th May 1997. The explanation is that the two documents (in the School Museum) relating to the creation of the Time Capsule and specifying its contents, ordain that the Capsule should be opened on the occasion of the Centenary of the School.

To be precise, the date of 6th May 2011 is specified as the actual date of the anniversary of the school's opening. However, this is a Friday, and by choosing mid-April we can also make the Centenary a part of the ACT Heritage Festival.

Along with documents relating to the establishment and building of the school the Capsule contains:

Centenary organisers now plan to open the Time Capsule, as prescribed, but only so as to add some contemporary items before sealing it again. In keeping with the original purpose, new items should be related in some obvious way to the School.

« Stress release at The Cottage