The dogs are coming 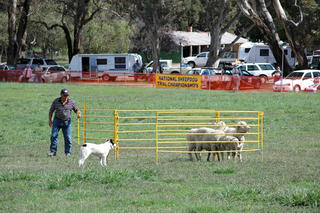 The 69th National Sheepdog Trials will be held at the Hall showground between Tuesday 15th March and Sunday 20th March 2011.

Organisers expect about 80 people to enter more than 300 dogs for the Trials. Trophies and prize money are offered in three different grades:

Maiden Dogs for dogs that have never won a trial;

Improver Dogs for dogs that have won a maiden trial; and

Open Dogs for dogs that have won a Maiden or Improver trial.

Organisers are also looking for volunteers to help during the event to manage the letting out and penning up of the sheep. One such volunteer is John Hyland, who was elected Treasurer of the Association last year after retiring from the Australian Taxation Office.

Born and bred in Canberra, John says he is "... still learning the difference between a Kelpie and Collie as well as the head and tail of a sheep".

"I offered to do a shift, but was told that I actually needed to know something about sheep. I was told that a city boy might be a good treasurer but that did not make me a good sheep-herder", John said.

The Trials originated in Canberra in 1942, with the first held to raise money for Legacy. Each year since, the National Sheep Dog Trial Championships are held in March in Canberra.

If entry numbers are as large or larger than last year, the event will start on Monday instead of Tuesday.

Spectators are welcome. There is no gate fee on the weekdays. At the weekend a $5 gate fee is charged to adults, and children are free. The gate fee assists with covering the costs of hosting the event.

The Trial Course is laid out with a race, bridge and pen representing the obstacles the sheep dog encounters in his daily work. Fifteen minutes are allowed to complete the Trial. Each competitor starts with 100 points, with points deducted for errors by the dog and the worker or obstacles not negotiated. Points are deducted when the sheep are off course or escape, when the judge considers the dog is not working, the dog turns tail, or the worker wanders off course or stops to assist the dog. If the dog crosses between the sheep and the worker he is deemed to be out of control and is disqualified.

Stress release at The Cottage »