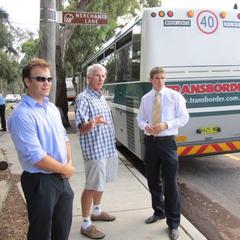 In January last year the Progress Association advised Roads ACT of the dangers being experienced at the bus interchange along Gladstone Street. After an initial site inspection we were advised that there would be no action.

Now, following intervention on our behalf by local member Alistair Coe MLA, we understand that a number of changes have been recommended. These include the implementation of 'speed cushions' on Gladstone Street between Alexandra Street and Victoria Street, a pedestrian refuge island at the Victoria Street intersection, and 'lateral transverse bars' on Victoria Street. These proposed traffic calming measures are intended to be further supplemented by associated signs and line markings to further alert drivers to the movement of children within the area.

Association committee member Greg Palethorpe, a resident and a parent living right alongside the interchange welcomes the proposed changes as a valuable step forward, which will be monitored closely. Greg has taken the lead on this matter for the Association.

We understand that the recommendations await final budget approval.

The dogs are coming »