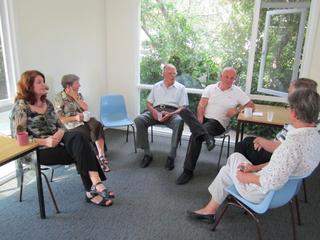 'Dr Phil' and Alanna were farewelled at an informal community gathering at The Cottage on Sunday 16th January. In thanking them for all that they have contributed to the community, Progress Association President Alastair Crombie noted how lucky Hall had been to have our own community GP for around twenty years, while all around us primary health care was being corporatised or consolidating into large practices.

Phil spoke about the special appeal of living and working as a doctor in the Hall community, and being able to relate to his patients as a fellow community member.

Phil and Alanna came to Hall in 1983, and have brought up their children here. Phil had a practice in the village for twenty years, and was disappointed not to be able to pass the practice on to another 'community GP'.

Amongst those attending was Wolfgang Wanjura, who read a poem that he wrote to mark the occasion. Phil and Alanna were presented with a copy of 'Hall stories - district, village and school' as a memento of their 28 years in Hall, and all present signed a card for them