Hall's history - the 'board walk' 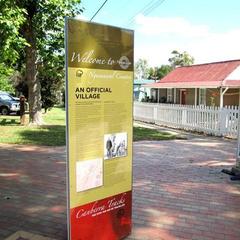 Some community members are finding out how much they did not know about the history of the village and surrounding district. The nine heritage interpretation signs now installed around the village offer locals and visitors alike some fascinating stories about the early days of settlement here on the 'Ginninderra Plains'.

The project has been carried out by ACT Heritage in close consultation with community members through the Progress Association. The Association was able to supply quite a number of the photographs that have been used.

The project, now completed, is to be officially launched by the Minister for Heritage, MLA for Ginninderra, and Chief Minister - Jon Stanhope. The Launch will take place in the park alongside Gladstone Street at 11.00 am on Thursday 20th January. Morning tea will be provided by the women of St Michael and All Angels. Community members are warmly invited to attend.

Work is also underway at present on preparation of sign boards for the lanes. Together with the heritage signs, and the conservation work underway at the Museum, this will help lift the Hall identity as a place of special historical interest in the ACT. Also, the Progress Association is printing copies of a new booklet looking at the history of Hall and district - 'Hall stories - district, village and school'. It is hoped that copies will be available for sale at the Launch on January 20th.