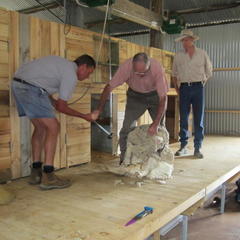 What does a one-time shearer do for his 90th birthday? Shear his last sheep of course. Local identity Greg Rule did exactly that on Friday January 7th, before an enthusiastic and appreciative gathering at 'Gold Creek West'.

Before getting into the job, Greg was asked to sign the stand, which henceforth will be known as 'Greg's Stand'. Greg and the hand-picked sheep then became the most photographed sheep and shearer in history, followed by a stirring rendition of 'Happy birthday!'. Before 'smoko' an impressive line-up of local shearers joined Greg on the stands.

Greg started shearing in 1945 at the age of twenty four and over the next eighteen years went shearing up and down the east of Australia, and in Tasmania. As you would expect, he is full of stories of the places and people from his shearing days. After hanging up the blades he worked for another twenty one years as an attendant at (the 'old') Parliament House – and has some yarns to tell from those days too!

After retiring from Parliament House Greg entertained tour groups with his shearing skills at Tralee Station, and was also back-up shearer at 'Gold Creek'.

Greg comes from one of the district's early settler families. His grandfather David Rule built a slab cottage on the Wallaroo Road near Hall in the 1870's, which is still standing, and being cared for by present owners Rod and Judy Roberts.

Greg's final shearing was overseen by fifth generation Australian farmer John Starr and son Craig at the relocated 'Gold Creek Station', a rural tourism enterprise run on one of the largest and most notable working pastoral properties in the Canberra region, 'Gold Creek'. The new site for this successful tourism business is 'Gold Creek West', with access from Victoria Street, the road that runs into Hall off the Barton Highway.

'Gold Creek Station' has been catering to international and domestic tourism groups for the past thirty years. It is now run by John's son Craig and his wife Sandra. Around 5,000 visitors a year experience Australian kelpies working merinos, sheep shearing, and a good Aussie barbeque.

The new complex, currently under construction, will cater to the needs of the existing tourism clientele, but will also open up for the enjoyment of the wider Canberra community.

The new facilities will incorporate a substantial function centre, as well as the shearing shed, and the centre will display a range of wool industry memorabilia – including, of course, a photo of Greg Rule, shearing his last sheep.

The ABC also has an interview and pictures of Greg on their website.