Polocrosse Juniors off to South Africa 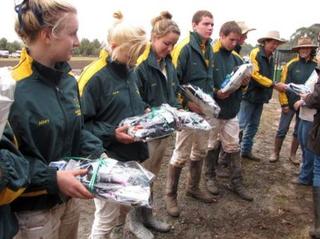 At the Hall Club's Polocrosse Carnival on the weekend of 29th - 30th May, the Polocrosse Association of Australia announced the Australian Under 16 Junior Polocrosse team and officials to compete in South Africa in July this year.

Team members were presented with gifts by PAA Director Odette Neumann,during a lull in the tournament at Hall.

Sadly, the Carnival ran into the wettest weekend most of us can remember, with competition finishing early as a result.

Congratulations to all the youngsters off to South Africa - and best wishes!

A twin village in Sweden?! »

« History of Hall - a Timeline.