History of Hall - a Timeline. 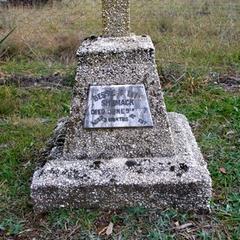 The forthcoming Centenary of Canberra in 2013 is stimulating a good deal of interest in the history of the Territory and the national capital. When the border of the Federal Capital Territory (as it then was) was drawn in a direct line from Mt Coree to One Tree Hill, the small community of Hall fell just inside the new Territory, but some district landowners were left with land on both sides - freehold in NSW, but leasehold in the FCT. A significant number of those whose land was resumed by the Federal government left the district rather than become lease-holders.

As part of an ACT Heritage project the Progress Association is assembling a 'Volunteer Guides Handbook' for those who volunteer to acts as 'guides' at the Hall School Museum. The following Hall timeline is to be included in the Handbook.

Readers are encouraged to send comments, or suggestions for additional dates.

Our photo shows the grave of Bessie Shumack, the first person to be buried at Hall cemetery, in 1907.

Polocrosse Juniors off to South Africa »