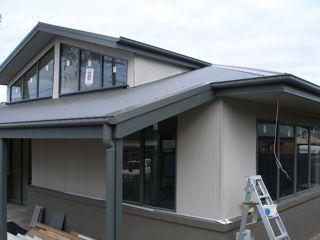 Local residents will have been watching the construction of a new premises at 9, Victoria Street over the past five months. The former doctor's surgery was leveled on the 20th of February, with construction of the new premises quickly proceeding. In early August the new owners will move into the building.

Barnett Lilley and Associates is a financial consultancy firm with a total of 11 staff. They have been located in Braddon for the past seven years, but have outgrown their office space and were seeking a location that would see them through at least the next decade.

Principal Stephen Barnett explains that the move to Hall was almost 'fate'. Stephen's family moved to Canberra from Melbourne in 1967, and initially lived in Hall, almost directly across the road from the new office. He became a frequent Hall visitor when his doctor, Philip Barraclough moved his surgery from Kippax to Hall. As Philip was GP to Stephen, his wife and their three children, rarely a month would go by without a visit to Victoria Street.

When Philip advised his clients that he was moving the practice to Belconnen, Stephen first tossed around the idea of purchasing 9 Victoria Street and moving his practice there. Over the years it had become obvious that Philip's practice had not suffered by moving to Hall, as the vast majority of his clients followed him there.

As a mature business with a long standing client base, Stephen was convinced that his clients would not be put off by his firm leaving the CBD and moving to quieter pastures. Nonetheless, several other options were investigated before it was ultimately decided that Hall was it. They made an offer on the premises in June last year and are looking forward to finally moving in early August.

Stephen's business partner Scott Lilley is delighted by the move. Living in Evatt, he is looking forward to vastly shorter commuting time each day. Scott believes that all the BL&A clients will see a visit to them in Hall as being somewhat of "outing". With most of the BL&A clients being self funded retirees, it is hoped that they will take their time and get to know Hall when they come out for an appointment.

As a means of showing off their new premises, BL&A will be inviting their clients to an 'open day' on Friday the 15th of August, between 1 and 6 PM. The clients are invited to drop in for a sausage and drink and peruse the new premises. Both Stephen and Scott wish to assure Hall locals that the likely traffic on that day will not be the norm!

The principals and staff of BL&A are also keen to meet with their new neighbours, and therefore extend the invitation to pop in at the open day to all Hall residents.