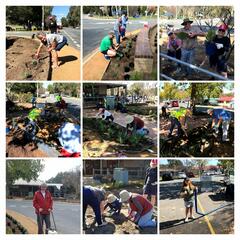 The "Hall Honeys" secured approval from the ACT Government for plans developed by Plot Design Group under a grant to the Village of Hall and District Progress Association within the Commonwealth Environment Grants for work by the "Hall Honeys" for development of bee-friendly gardens in Victoria St, Hall.

The first stage of garden development is beds on the East and West corner of Gladstone and Victoria Streets and on the East side of Victoria Street outside the Victoria Square offices opposite Daughters@Hall. A community working bee was held on Sunday 18 April to plant and mulch these garden beds. Thanks to the "Hall Honeys", the Rotary Club of Hall and Hall village residents for the success of the day following preparations by Leigh Crocker and Jonathan Palmer.

The plans are available at www.hall.act.au/file-preview.html?dboid=6119