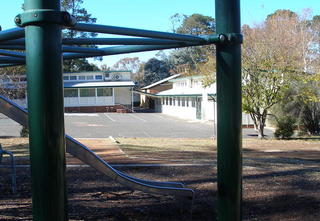 Update: We are now advised that $1.5 million of capital funding has been allocated to Hall, and that the Government is undertaking community consultations with all affected communities, with Hall now fourth in line.

Hall school site is to be kept intact and and is ear-marked for 'community uses'. It will also benefit from the $24m being allocated for refurbishment of 'former' school sites, and provision will be maintained for accommodating the Hall Pre-School.

These are the bare bones of the Government's announcement today of it's response to the Purdon consultancy report, which involved consultations last year with affected communities.

The Government insists that school closures were "not about saving money", but were part of the plan to build a better education system for Canberra. Control of the former school sites is now being transferred to the Department of Housing and Community Services, which is too oversee the refurbishment, and tenant the buildings.

Our understanding is that the two main Hall school buildings will be refurbished, while a number of the demountable classrooms are to be removed. The Government is aware of the significance of the Laurie Copping Heritage Centre, and we have already indicated that we are keen for this to be placed under community control.

The 'Strategic Assessment' that forms part of the Purdon Report identifies in its preferred scenario for Hall 'sum costs' (costs of refurbishing existing buildings and construction of a new community centre) of $4,671,000. There is no clear indication of what this money would be spent on, and we do not yet know if the Government has accepted this recommendation.

Liberal leader Zed Seselja said this afternoon that Flynn, Hall and Tharwa would be the next three targets for the Opposition's community consultations on re-opening schools. Before their recent consultation at Cook he said:

"Our plan is to consult and talk to affected families and parents to determine whether there is sufficient support - and the numbers - for these closed schools to re-open.

"Whole communities have been dislocated. Families have been affected at 23 schools, children have been separated from life long friends and teachers have been involuntarily reassigned to new schools while some positions in the education system have been cut altogether.

"The Canberra Liberals are committed to listening to the local community. We believe that the arrogant and out of touch Stanhope Government is not interested in consulting with the community.

"Our plan is to work with the community to determine whether closed schools can be re-opened."

The Purdon Report and information about the $24 million refurbishment program can be found on the Department of Housing and Community Services website.

The three main recommendations of the Purdon Report in relation to Hall are:

NOTE: This item will be updated as more information becomes available.