The making of a Showground 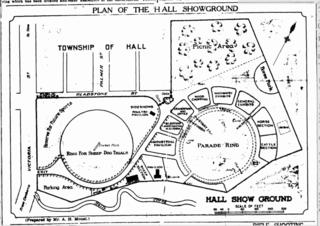 The 'Showground' is an important part of the village - with a history that some may not be aware of. For thirty six years (1927-1963) the 'Canberra' Show was held on the showgrounds at Hall. In 1927 the Advance Hall Pastoral and Agricultural Association was inaugurated, with the development of Show activities as its sole purpose. At the 1931 Show, Prime Minister Jim Scullin officially opened the 'piped arena' - now the venue for pony club events and the National Sheep Dog Trials. The Show of 1932 was opened by the Prime Minister, Joseph Lyons, with the promise of an infusion of greater Federal government funds to help elevate the Show to one of national importance. In the following year the Canberra Times reported in the following article on a 'grand plan' for the Show:

The making of a Showground. Rapid progress in a few years.

In response to a request from the F.C.T. P. and A. Association [Federal Capital Territory Pastoralists and Agriculturists Association - ed] the Government has laid out a plan for the showground at Hall, and the committee of the show has adopted a plan covering five years for the development of a model showground. To date, rapid progress has been made, and with continued support of exhibitors and the public, the Federal Capital Territory will enjoy, within a few years, a completely equipped ground such as has taken many centres several decades to realise.

During the past few years the members and committee and officers of the F.C T. P. and A. Association have been impressed with the idea that in the near future a very fine show can be built up at Hall. Each year the quality and quantity of exhibits have confirmed their impressions. Only those who saw the Hall Showground some few years ago can have any idea of the large amount of work that has been done in order to carry on the show successfully.

A new ground has been formed in the last few years. One of the first essentials was to clear all surplus timber, necessitating a great deal of hard labour. The hall, which originally stood at Ginninderra, was then erected on the ground as the pavilion. A large building has been erected for the sheep, fitted out with a great number of pens, capable of holding from 200 to 250 exhibits. The enlargement of this building, which consisted of lengthening the main portion and putting a skillion right along one side, is a portion of the work recently carried out by voluntary workers at Hall. A fence has been erected round the ring which has been levelled and made ideal for the increased programme.

Cattle pens have been erected recently and are up to date and would do credit to any showground. They are of a permanent nature and will do service for the show for many years to come. A building to hold the poultry exhibits has been erected, but further alterations had to be made this year in order to cope with the increased number of poultry exhibits. Rodeo yards have boen erected conveniently situated near the ring. Much credit must be given to Dr. T. Watson, of Gungahleen, for his personal supervision and for finding labour to carry out this work.

Another large building has been erected for luncheon accommodation. Provision has also been made for pig exhibits in the form of pens with a covering overhead. This work has been carried out mainly by voluntary labour by the committee and near-by residents, the trustees and show committee also providing money to employ labour to assist in the big undertaking. Much of the work done on the showground this year has been made possible by the assistance of the Government. Timber and iron were supplied by the Government for cattle pens and for the extension of the sheep section.

The show has reached the position in which it finds itself today, step by step, carefully planned hard work, the united loyalty of the committee, the generosity of the Federal Government and the patronage of the public. The next step in improvement to meet the growing demand that is placed upon the Association, is the necessity in the forthcoming year to have a new exhibition hall erected and a number of loose boxes and horse stalls to meet the requirements of competing horses drawn from distant parts. The P and A Association committee looks forward to the future hopefully. Given the same tremendous consideration by the Federal Government, the same united loyal enthusiasm of the committee, the same liberal patronage of the public, the show will grow to be one worthy of the great Federal Capital city of which it forms a part.

« Go ahead for traffic improvements