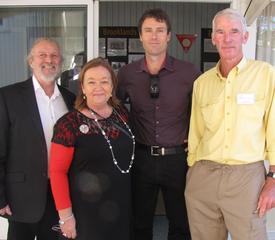 A hundred and twenty or so people turned out for the official Launch last Friday afternoon of the new exhibition at Hall school - 'Present at birth. Schools and teachers of the Capital Territory 1913'. The launch was deliberately timed to coincide with celebration of World Teacher's Day in the ACT, and in her speech Education Minister Joy Burch paid tribute to the pioneer teachers of Canberra's early bush schools. She also acknowledged a better understanding of the fact that Telopea Park was not in fact the first Canberra public school, but the twenty-eighth!

Honorary Curator Phil Robson then introduced Glenn Fowler, Secretary of the Australian Education Union in the ACT, who spoke briefly about World Teachers Day. Glenn acknowledged Lyn Cleaver, a teacher today at Holder, and a relative by marriage of Fred Cleaver who taught at Tharwa school 1911-1917, to illustrate the enduring values of the teacher's profession.

Alastair Crombie, Project Coordinator, enumerated the many sources of assistance received. Amongst them were special thanks to the ACT Surveyor General and volunteer Allan Eeles for help with locating schools sites and the gift of copies of the relevant survey plans and early maps.

The exhibition includes a slide show, a special mapping display, a display of early school books and a needlework 'sampler' dated 1887 from the Stone Hut school.