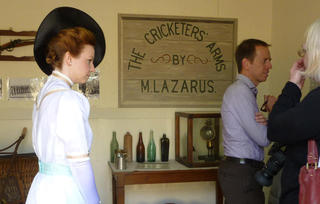 The exhibition opened on the Saturday morning with an address by Dr. David Headon, the Cultural and Heritage Adviser to the Canberra 100 organisation. There was a large stream of visitors looking at the various displays and activities and then enjoying morning tea at the Cottage provided by the members of the Hall Churches.

The highlight was, of course, the display dedicated to the re-creation of Victoria Street as it was in 1913. The main feature being the large mural painted by Shaun Robson. This was brought to life with the artefacts loaned by the descendants of those families that operated the businesses in 1913. Add to this the bird sounds in the background, the straw on the floor and the gum tree branches and you have all the senses taking the many hundreds of visitors back to a time when Hall was a vibrant and active village at a time Canberra was being proclaimed. Which reminds me of the wonderful and surprising visit of 'Lady Denman' who took time away from her official duties to come to Hall.

Jim Rochford, our own living treasure, attended the opening and enjoyed chatting to old chums and seeing the displays.

All the display areas, the School, the heritage display, the church and theatre showing Charlie Chaplin movies, the Hall Mens Shed display of old trades and tools with blacksmith Adam Fromholtz had large numbers continually moving through them.We estimated that there were over 2500 visitors over the two days who enjoyed the wide range of activities and displays.

The bush dancing by the Monaro Folk Group was enjoyed greatly by the audience. The dancers all dressed in period costumes also added to the ambience of the day. Their music and dancing was so popular that a number of visitors joined in.

The Rotary Club of Hall were in control of the Saturday sausage sizzle with the 'Friends of Hall School Museum' and their friends taking over on Sunday.

The 'Hall & District 1913' exhibition was a great success and a tribute to all the volunteers who worked on the project and the families who kindly loaned or donated artefacts.

Thanks also to the Village of Hall & District Progress Association and the Rotary Club of Hall together with Bunnings and Masters for their support.

The exhibition has proved so successful that we plan to keep it going until after the Heritage Festival as many people expressed that they would like to return and bring friends. It will be open on Thursday mornings (except Anzac Day) and the first Sunday of the month (Hall market day) and by appointment by emailing