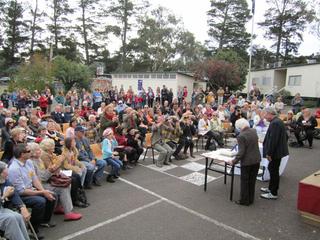 A year or so in the making, the School Centenary, celebrated over the weekend of April 16-17th, was a great success. An estimated 600-800 people visited the Museum and the special heritage Exhibition 'Yesterdays Hall and School' over the weekend, and the Centenary Dinner was a sell-out with 160 attending. Local MLA's Alistair Coe, Vicki Dunne and Meredith Hunter, and Federal MP for Fraser Andrew Leigh, were amongst those attending.

It was especially pleasing that the district's pioneer families were so well represented, and that so many people travelled from up and down the east coast of Australia to attend – from Prospect, Ethelton and Willunga in South Australia, Quakers Hill, Sunshine Bay, Penrith, Wagga, Waitera, Koorawatha, Tucki Tucki, Leeton, Young, Bookham , Coledale, Albury, St Leonards, Reids Flat, Bowral and Frederickton in NSW, Darwin (NT), Currimundi in Queensland, Wattle Glen and Parkdale in Victoria, as well as the neighbours from Gunning, Yass, and Murrumbateman (this is not the full list!).

It was also great that so many 'golden oldies' were able to attend, many of whom whose schooling was entirely in the single class-room that is now the Museum. The descendants of Charles and Matilda Thompson were especially well represented. One of them who lives in Canberra – John Thompson – spoke at the Centenary Ceremony in the afternoon, and again at the Dinner. John also lent some very special items of family memorabilia for the Exhibition, including the illuminated address that the citizens of Hall presented to Charles Thompson at his farewell in Kinleyside Hall (Jim Rochford recollects that he attended this occasion with his father).

Other speakers at the Centenary Ceremony were Jan Day (Principal in the nineties), Dr Michael Pearson (Chair of the ACT Heritage Council), and Mrs Irene Copping, widow of long serving Principal and Museum founder, Laure Copping. Mrs Copping also cut the superb Centenary cake made especially for the occasion by Hall resident Jan Shepherd. MC for the afternoon, David Kilby, then supervised the opening of the Time Capsule, assisted by ex-pupil Andrew Yallop. The Ceremony began, of course, with the ringing of the school bell, and raising of the Australia flag, in time-honoured tradition.

Following the Ceremony, the crowd assembled in 'decade groups' around the school which were captured in photos by volunteer photographer Narelle Power (photo gallery below).

As well as the formal Ceremony, those attending on Saturday enjoyed a display of veteran vehicles and machinery (including Kingsley Southwell's 1911 Renault, sharing a birthday with the school), music and dancing from the Monaro Folk Society and their Bush Dancers Display group, a Rotary BBQ, and an all day tea shop at the Cottage run by the local Anglican and Catholic churches. A bookshop within the heritage Exhibition did good business, with copies of the Progress Association's 'Hall Stories' selling well, and the Hall School Centenary wine selling right out. Two young riders from the Hall Pony Club attended the Ceremony on horseback as a reminder of the days when this was the most common means of transport.

The Centenary Dinner attracted a large number of former staff and students, and lots of parents of children who had the good fortune to attend the school. Speakers at the Dinner who shared reminiscences of various kinds were former Principal Joy (Porter) Sheargold, John Thompson, former students Ralph Southwell, Will Brydie-Watson and Jack Williams, former teacher Mandy Perry (over from South Australia with Brenton for the occasion), and former School Board Chair Monica Kennedy. Hugh Watson, a parent and former Board member was MC for the evening, which include a raffle for two 'six packs' of the Centenary wine. Garrie Greenwood took on organizing of the Dinner, and she and her team of helpers did a terrific job in managing the 'full house'.

It is amusing now to recall that during an outbreak of 'organizer's paranoia' at the end of last year, we were wondering if anyone was going to turn up! They did, and by all accounts, enjoyed the occasion. Planning and organizing was greatly assisted by the generosity of the Rotary Club of Hall, again supporting the local community by underwriting costs to the tune of $1,000 - as well as putting on the very well patronized BBQ.

The Progress Association, itself now well over a hundred years old, is pleased to have 'done the right thing' by all those who fought for the establishment of the school, protected and nurtured it for nearly a hundred years, making it a special place of learning for several generations of Hall and district children.

With the Centenary now behind us, we can now focus more attention on the School Museum, and ensure that it remains as a rich and informative home for the stories of the Hall Public School and all the staff and families who were part of it. We plan to add a series of 'case stories' on the twenty other one-teacher bush schools that operated in the district at various times, and make this a feature of our next special Exhibition in 2012. Meanwhile we are proceeding with creation of the 'Friends of Hall School Museum' to give support and encouragement to the present small group of volunteers.