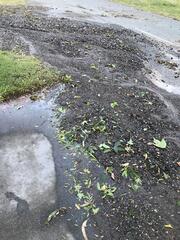 The wetter than usual conditions over the last eighteen months, including severe and torrential rain, have seriously exacerbated the chronic issue of storm water drainage and the condition of the laneways in Hall Village.

The inundation of storm water that has been experienced by many Hall residents this year and the torrential flows eroding the laneways in Hall Village is the hot topic of conversation in the village. The request on 16 February 2022 by more than 60 people to the Village of Hall and District Progress Association to advocate with the ACT government for action underscores the seriousness of the issue and adds positive weight to the actions being taken by the Progress Association. In 2017 the then Progress Association President also raised the issue of storm water drainage as a major priority of the community with the ACT government.

Almost all other communities in the ACT have been planned in their development over the last 111 years. Hall Village established in 1882, 29 years prior to the creation of the Federal Capital Territory in 1911, has evolved organically over the last 140 years with basic infrastructure lagging significantly behind development of the community.

During the sealing of all streets and partial curbing and guttering in Hall Village completed in the early 1990s, a street drainage system was established servicing some 55% of the street surface. However, no residential storm water drainage system was established, and houses continue to be required to direct storm water to the rear laneways and streets. The ACT government has also been inconsistent in its approval of residential storm water management in Hall village.

On 14 January 2022, on behalf of the Progress Association, I wrote to the Minister for Transport Canberra and City Services requesting urgent attention to arrange for the relevant ACT government authority to undertake the assessment, design and completion of works on storm water infrastructure and associated works to rehabilitate and maintain the laneways in Hall Village. The request to the Minister was also copied to all MLAs in Yerrabi.

Information on the actions being taken on the issues of storm water drainage and laneway erosion by the Progress Association Committee was included in the February edition of the Rural Fringe and in these news items on the Hall Village website. Information will be updated on the website as it is available.