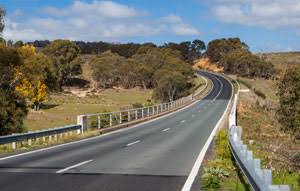 The Ginninderra Catchment Group (GCG), Onerwal Council, Yass Area Network of Landcare Groups (YAN) and Friends of Grasslands (FOG) are concerned that the proposed upgrades to the Barton Highway will have significant negative impacts on the Hall Travelling Stock Route (TSR) and neighbouring private properties, and that they will:
- Isolate or clear significant Aboriginal Heritage Ring Trees
- Clear areas of EPBC-listed Critically Endangered Box Gum Grassy Woodland
- Impacts on a local Sugar Glider population and their habitat trees, which will become isolated in the middle of a dual-carriage highway.

Although the redesigned alignment for the proposed northbound lanes now avoids directly removing the ring and habitat trees as originally proposed, the road still undertakes a direct route through the TSR rather than proposed alternate designs such as maintaining the width of the ACT median lane through the Hall TSR area.

The petition can be accessed and signed at www.change.org/p/barton-highway-upgrade-alliance-protect-aboriginal-and-ecological-heritage-sites-along-the-barton-highway