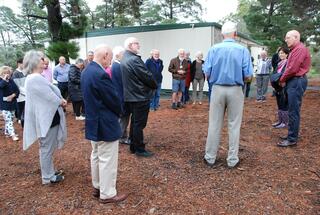 Despite a very wet morning which promised to dampen their visit to Hall Village and the Hall School Museum & Heritage Centre their Excellencies General David Hurley and Mrs Linda Hurley greatly enjoyed their time in the village.

Their Excellencies were greeted on arrival by the Hall School Museum & Heritage Centre Honorary Curator, Alastair Crombie, together with a large group of Museum Volunteers. Their Excellencies then went inside the main building to see three of the Museum's special displays.

The Governor General congratulated the work done by the volunteers in establishing and maintaining the Museum which he acknowledged was preserving important local history.

« One Tree Fire Tower Side Trail closed until late April