Back to the hills - and the Brumbies! 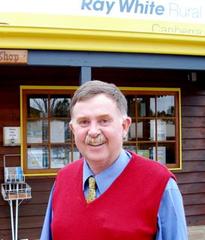 Meet Simon and Janie Southwell, owners of the family business now operating the 'Ray White Rural' franchise from the Old Bootmakers Shop in Victoria Street. Simon and Janie and their four children (George, Clare, Thomas and Jeremy) have recently moved south from the flat back blocks of Queensland (St George to be exact) to be back amongst the hills of the southern tablelands. Simon says they wanted the children to get their education in the Canberra area, and he wanted to be closer to the snow, trout streams - and the Brumbies!

Simon comes to Hall after very successfully owning and operating a similar franchise in St George. Moving to Queensland in the early eighties after a couple of years farming in Texas, he first worked for a farm machinery supplier in Moura. Offered a similar post in St George with the same company, he added on a local and interstate transport business, before being approached by Ray White in 1993 to open one of their first rural offices. Fourteen years later Simon was Ray White Rural's 'Property Marketer of the year' - a national award - and is now certified as one of about sixty 'Elite Performers' in the Ray White Group. Which is to say, he knows his business pretty well.

Their new business here in Hall operates in the residential and commercial, as well as the rural property market. Jan Kenny has been engaged as the first senior sales consultant, and another staff member will be joining soon. Simon advises that he operates on a 'no boundary' basis, meaning he can market any property, anywhere in the country. 'Tally-Ho', a five acre property up the Nanima Road, was the first property to sell under Simon's hammer, last week.

Yes, Simon is part of the district Southwell clan. He is the son of Mack and Ursula Southwell, growing up with sister Jane and brothers John and Robert at 'Ginnagulla', the family home close to where the Boral Quarry now operates. As reported in the Rural Fringe last year (August 2007) Simon returned to attend the Centenary of worship at St Francis Xavier Church in 2007, having been at the fiftieth anniversary as a one year old in 1957. As further evidence of his truly local credentials, he worked for a while as a young man for Jim Rochford on his sheep property 'Dunleary'.

His father was President for three years of the National Agricultural Society which ran the Royal Canberra Show and also President for a while of the National Sheep Dog Trials Association. The family home was sold after his father died (when Simon was fifteen) and his new home is 'Linden Homestead', Murrumbateman.

He tells a wonderful tale about taking his youngsters to catch the Transborder bus into Canberra to school. When the bus pulled up he immediately recognised the driver, John Battye from Yass, as the same driver who had driven HIM to school back in 1973! At that time, Transborder had a fleet of two. Simon recalls with admiration that John Battye used to pick up all the kids and run the bus to Cotter Reserve one day in the school holidays as a treat.

Welcome back to the blue hills of the Brindabellas Simon, Janie and the children!

Ray White Rural is listed in the Business Directory of the hall community website. You can contact Simon at his office on 6230 2500.

« An Interim Report to Members