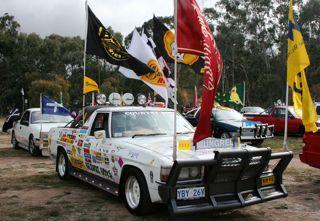 The inaugural Hall Ute Show was a shining success despite cloudy skies and freezing temperatures. Over 70 contestants assembled at EPIC and moved in a colourful convoy led by a Wallaroo fire tanker to the Hall Polocrosse grounds for a display and judging session.

Vintage to modern day utes were entered with B&S, Mid-life Crisis, Feral, Rural and Chicks sections well supported. A large number of valued sponsors supported the day and contributed to its success. Thanks are also extended to all the local and visiting volunteers who worked toward the day's fun and entertainment.

You can view more photos from the Ute Show in our Photo Gallery.

An Interim Report to Members »

« New Editor for Rural Fringe - and thanks Rhian!