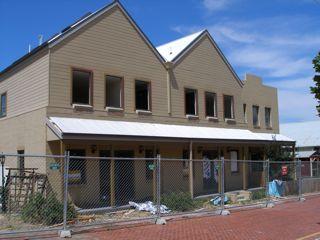 The re-building of Victoria Square in compliance with the approved plans is under way at last. Residents and visitors to the main street will have noticed that the appearance of the tall units on the street front has changed considerably. This has been achieve by raising the window and lowering the height at which the corrugated iron awning attaches to the front wall. The overall height of these units will remain as built, but the appearance and the reality will be a two storey building, not three storey.

Units at the rear - some of which are as much as 1.6 metres above approved height from ground level - are going to need more significant re-structuring. We hope and expect that this work will now continue through to completion within the coming months. If so, we can perhaps expect the buildings to be occupied before the end of the year.

« Hall Carols at the Christmas tree - and Santa!