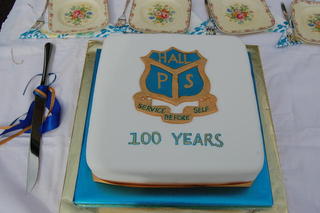 What a fabulous weekend!!

On Saturday the weather was not perfect but the rain held off for all to enjoy the festivities.

The old vehicles and machinery parked on the newly mown grassed areas were a highlight. There was a variety of vehicles on display, ranging from an early 1911 Renault (same build date as the school!), a 1929 Chev truck, a cute Vespa motor scooter, the 50's-60's Holdens and Ford to military vehicles including the well recognised Jeep and large army transports.

The original school building that houses the Laurie Copping Centre museum is always popular and was brought to life by the colourful storytelling of Elizabeth Burness and the reminiscing of the pupils who shared their recollections of being taught in that building many years before.

There was a lot of interest and memories triggered by the "Yesterdays Hall and School" heritage display. The collection featured a large number of items loaned by local families that reflected the work carried out by early Hall and district residents and their recreation activities and living styles over the various eras. The photographs of old Hall days were also popular. It is hoped that this display will become a more permanent feature in the village in the future.

The Gallery of old school class photos was a big hit with ex-pupils and teachers looking to find themselves and their friends and colleagues in the hundreds of faces going back over many years.

An appreciative audience enjoyed the performances by The Monaro Folk Society of a number of early bush dances with their accompanying musicians, all dressed in period costumes in keeping with the character of the day.

David Kilby did a wonderful job as MC for the afternoon with his lighthearted commentary and introductions of the VIPs for the day: Mrs Irene Copping (wife of the late Laurie Copping), Mr John Thompson (Grandson of Charles Thompson, the first Teacher-in Charge of Hall School), Ms Jan Day (Principal in the 1990's) and Dr Michael Pearson (Chair of the ACT Heritage Council).

The ceremonies continued with the opening of the Time Capsule by Andrew Yallop, which housed early school documents and curious old school writing paraphenalia. Then, the major event of the day, the cutting of the Centenary cake by Irene Copping.

Hall Rotary Group supplied the hungry throng with sausage sandwiches and cold drinks over lunchtime. These proved so popular that they ran out!

The wonderful ladies from the Hall Churches worked tirelessly all day to put on delicious Devonshire Teas in a quiet relaxing atmosphere in the Cottage.

The afternoon continued with a steady stream of people looking over the displays and enjoying the day.

As night fell on the quiet village, the Pavilion came to life with celebrations continuing with the Centenary Dinner. Apart from enjoying a sumptuous meal, the dinner was an opportunity for ex-teachers, pupils and their parents to gather and
reminisce. The MC for the night was Hugh Watson who introduced the speakers John Thompson, Joy Sheargold, Will Brydie-Watson and Jack Williams, Mandy Perry and Monica Kennedy who entertained the gathering with stories and anecdotes of their association with Hall School.

Sunday was a quiet, more relaxing day with beautiful Autumn weather greeting a number of visitors to the Museum and Heritage display.