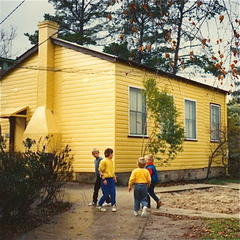 It was a momentous, but extremely sad, occasion for those present which included the seven active members of the P&C and Allison Gel who kindly came and offered her support and thanks on behalf of the Hall Community. Following the passing of the resolution, the following statement was made by Penny Haisman, the outgoing President:

"It is now nearly four years since we heard the devastating news concerning the fate of our school. When I took on the role as President of the P&C at the beginning of 2006, I did so with the image of what this role normally was – a nice quiet task with very little to do and NO PUBLIC SPEAKING! As we all know, it didn't quite turn out that way. I can still recall the hands in my back as my 'friends' pushed me towards the television cameras.

Initially we were sure we would re-open, no-one could believe that our school was axed. Many in the community helped us pack up the P&C resources. We held these in store for two years before deciding that we did not want to continue paying storage costs indefinitely. So, we donated art & craft materials, games, etc... to Barnardos. We donated books to LifeLine, uniforms with logos to the Smith Family and kitchen type items to St Vinnies. We also sold a range of non-logo uniform items to Giralang and Lyneham primary schools. Other items, such as the BBQ and kiln were sold to members of our community and have found very good homes.

For the next 12 months, the remaining goods collected dust in the Men's Shed. Special thanks to Bob and Helen for stepping in to help with moving everything around on a number of occasions.

More recently we donated the remaining uniform items to Giralang Primary. Most of the P&C records were passed on to Tony and Margaret Morris to be assessed for inclusion of the Hall School Museum. The financial records must be kept by us for the next seven years and are currently stored in the RIB. Anita will retain the most recent Cottage Care records until they can be disposed of.

Since the closure, we have wanted to maintain support for the Hall Community in return for the community's support for the school over almost 100 years. Each year we supported the village Christmas party with donations. We have donated funds to support the school Art Competition run in conjunction with the National Sheepdog Trials. We also donated money to the Flynn Primary fighting fund.

Following the Act Government's decision in December 2009 in response to the Report of the Legislative Assembly Committee of Inquiry into School Closures to not reopen Hall Primary School, the P&C made the sad, but inevitable decision that it is not able to continue.

It was a unanimous decision that our remaining funds would be shared amongst two of North Canberra's special schools (Cranleigh and Black Mountain), and the three primary schools devastated by the 2009 Victorian Bushfires (Marysville, Strathewen and Middle Kinglake).

Marysville Primary has a small enrolment of just 32 and is currently operating out of nearby Taggerty. They are expecting to start the 2010 second term (12 April) in their new premises.

Strathewen Primary has a slightly larger enrolment of 39 and is currently located within the Wattle Glen Primary school. They are expecting the first sod to be turned on their rebuilding project any day and hope to be in their new premises by Term 4 of this year.

At the time of the bushfire Middle Kinglake Primary had 148 students - it currently stands at 121. They are working out of temporary buildings at the moment with plans well underway for the construction of their new buildings (which includes a purpose-built parent's room – every P&C's dream).

We all know that the community spirit at Cranleigh and Black Mountain mirrors the strength that we had here at Hall and I'm sure you would all agree that there can never be too much support for these schools. From my conversations with representatives of the three Victorian schools, they also have a community that sees the school as their hub. They, like Hall, service small villages and surrounding rural areas. Our wish is for these funds to go to the parent communities of the three devastated schools so that we can assist them in some small way of getting back on their feet once they are settled into their new premises.

There are many in the Hall community who I must thank for getting in front of those cameras, for writing many letters to the Canberra Times and politicians and for fighting for what we believed in. In particular, I would like to thank Alistair, Jo and the Progress Association for the tremendous effort they put into the fight to reopen the school. There are many others, too numerous to mention by name, who also have our thanks and gratitude for the support they have provided over the years.

The P&C could not have kept going for as long as it did without the help and dedication of a small group of very special people who kept turning up to our meetings (and we did discuss things, we didn't just drink coffee and eat cake – well not all the time anyway) and willingly gave up their time.
The core seven of the P&C for the past three years has been Maryann Harris, Jennifer Lewis, Anita Kilby, Karen Johnstone, Helen White, Bob Richardson and I. While Anita, Maryann, Jennifer and I all had children attending the school when it closed, Karen, Bob and Helen did not. This didn't stop them from being involved and providing tremendous assistance and support over the past four years.

Karen's passion and commitment and Helen's enthusiasm to progress issues while always maintaining a cheerful positive outlook have been inspiring. What can I say about Bob – he enthusiastically and lovingly represented the blokes of the community and sorted out the 'weasel words' of the bureaucrats!

But the two people who really ran things on behalf of the P&C were Maryann and Jennifer. They were the stalwarts and it was Maryann who fronted up to the cameras as the P&C representative and who led the charge at the Committee of Inquiry – so my grateful thanks go to her for stepping up and being the very public P&C face of this fight.

The anger is still with me, as I know it is with many of you here today and I know that we will never forget, or let the Government forget, what they did to this wonderful community. Although bitterly disappointed about there being no public school in Hall, we hope that the independent school option is successful and that it will bring a much needed boost to the village.

We have fought long and we have fought hard but it is time to move on, so with regret and a sense of loss, on behalf of the Hall Primary School P&C – thank you and farewell".

« More on Henry Hall of 'Charnwood'